£175 million development to be built in Sheffield’s city centre

Plans to build a £175 million development in Sheffield city centre have been announced.

The complex, which is near West Bar Square, will include offices, homes, a four star hotel, shops and restaurants.

The developer Urbo Regeneration was granted planning permission on 2.97 hectares of the derelict site in February 2017.

West Bar Square is seen as the city’s leading business destination and is home to large office buildings, law firms and technology companies.

Previous proposals for West Bar were drawn up more than six years ago by a company called Castlemore, which collapsed during the recession.

Urbo Regeneration aim to help expand the city centre and create a landscaped square, on a similar scale to Millennium Square, surrounded by cafes, shops, restaurants, a hotel and apartments.

A public local inquiry will be held at Sheffield Citadel Salvation Army, on Psalter Lane, Sheffield on the 4th June. 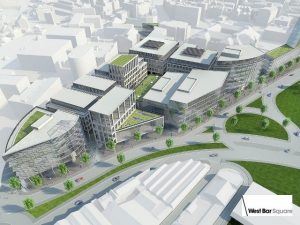