Employees of home entertainment retailer Richer Sounds are rejoicing after the company’s founder handed over control to staff.

The move by majority shareholder Julian Richer will see workers pocket £1,000 for each year they have spent there.

Richer Sounds have 53 businesses nationwide, one of these being located in the popular student spot and west-end suburb Broomhill.

It was announced on Tuesday that 60% of Mr Richer’s shares are to put into a trust similar to the model ran by department store giant John Lewis.

Customer Sales Advisor Danny Harrison, 34, from Stockport, said: “It’s absolutely brilliant – everyone has a smile on their face this morning.

“I’ve been in this job nearly nine years and never once have I thought about leaving,” he added.

“I can honestly say I’m proud to be associated with Richer Sounds. They make you feel like you’re valued in your role and is a great place to work.”

Richer, who is a Yorkshireman himself, has spoken of the incredible loyalty he feels towards his colleagues and maintained it is they who should receive any benefits for their years of hard work, not simply the highest bidder.

They follow companies like Aardman, who are the animation studio behind Wallace and Gromit, and Wilkin & Sons in passing the baton to its workforce.

This week’s revelation only furthers the cause of Richer Sounds, with it amongst a mere 14% of companies that favour women when it comes to pay.

Management at the Broomhill store were approached for comment but politely declined to do so. 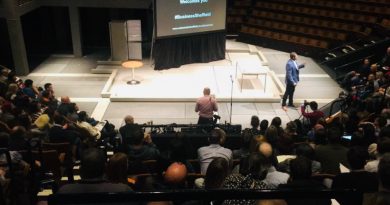