A shop owner has launched a petition to stop a further extension of the licence for scaffolding on the top of Chapel Walk on Fargate.

Carl Dunne, owner of Cards & Gifts, started the petition and said that he will be forced to close if the scaffolding gets extended until Christmas.

He said: “Everyone in Chapel Walk is struggling and nobody will help us. The council have turned their back on us.”

The scaffolding was originally put up in September 2017 as part of a Student Development project led by the Coyne Group.

However, the construction has since been delayed several times and may now run into the Christmas period, for a third consecutive year.

Mr Dunne said: “When you look into Chapel Walk, it looks derelict. It looks closed. It’s intimidating and it stinks. It’s just not a nice place to be.

“Since the day the scaffolding was erected and completed there has been zero works carried out on the exterior of the property. We’ve had nothing but delays and delays.”

After already trying to get a reduction in business rates and contacting local councillors, Mr Dunne started an e-petition to Sheffield City Council to prevent a further extension of the scaffolding into the Christmas period.

However, Mr Dunne fears that an e-petition might not gather all of the residents’ and shop customers’ signatures, as many are of old age and have limited access to the internet.

He has therefore reached out to Green Party Councillor Martin Phipps, who covers the City ward, to get help with putting physical sign-up forms in shops on Chapel Walk.

Councillor Phipps said: “I think it is important to press for the scaffolding to come down. People don’t want to go down Chapel Walk because it’s not an inviting place to go anymore.

“We don’t want the scaffolding to stay up any longer than it’s needed. I think we can send a message that will help get it down sooner.

“I think the important thing is making sure that this isn’t a third Christmas. For Carl and other traders down there Christmas is the biggest retail time of the year.”

ShefNews reached out to Coyne Group, the developer of the project, and headoffice3, the current contractor. Neither were available for comment at this time.

The online petition to Sheffield City Council can be viewed and signed here. 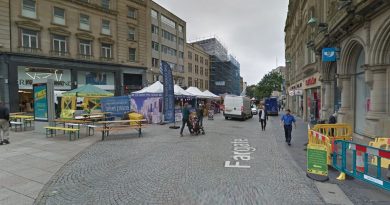 Fargate to become a “force to be reckoned with.”

Footfall soars to the magic million in Fargate