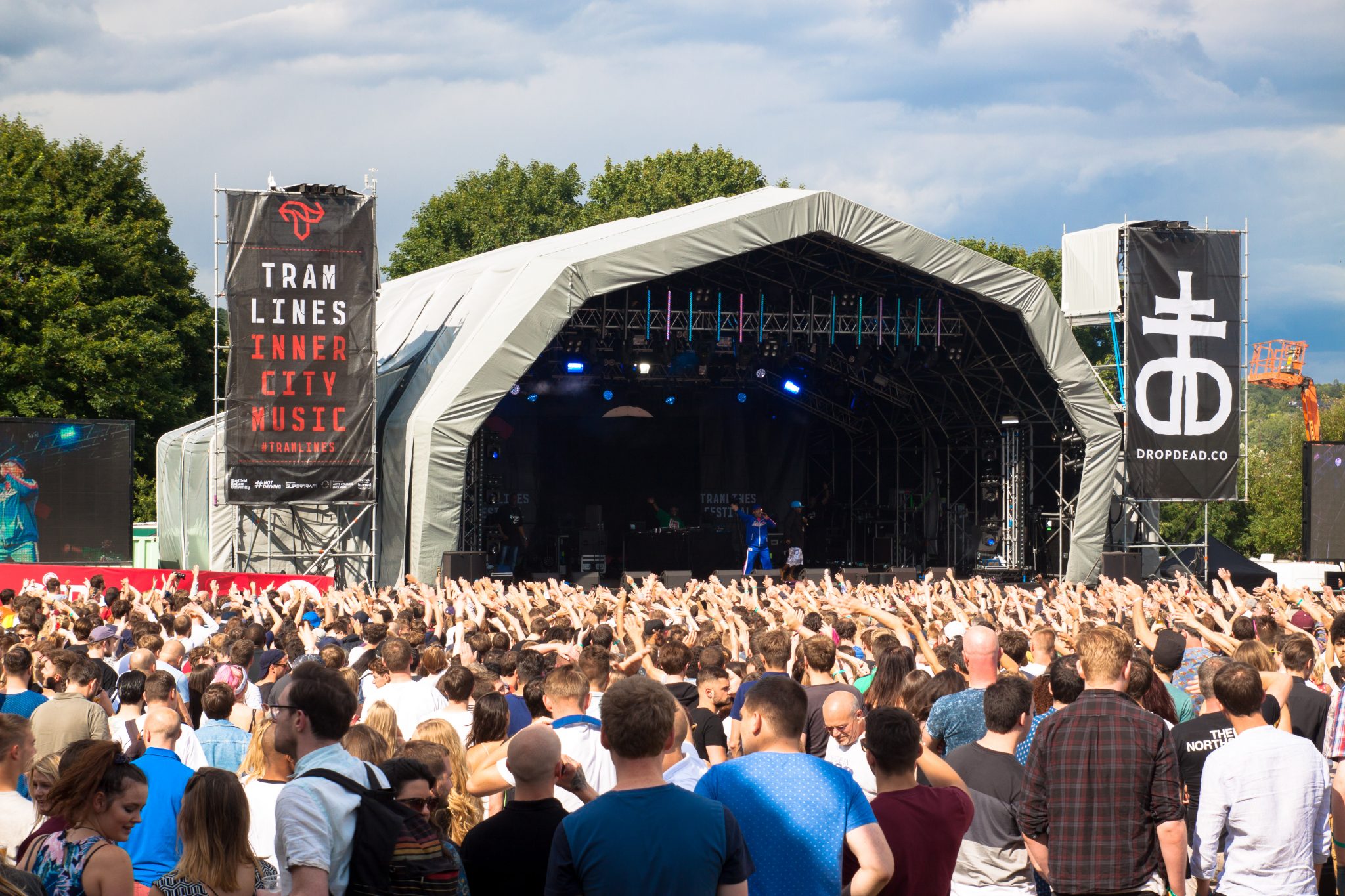 Just six of the 38 confirmed acts for Tramlines 2020, are women compared to 28 all-male acts.

After being criticised for its failure to present a diverse line up last year, the festival is being condemned once again for its non-success in creating gender balance.

Vick Bain, music industry consultant and campaigner for Women in Music, has worked in the music industry for over 20 years and was CEO of the British Academy of Songwriters, Composers. She feels there is more festivals can do to book female talent.

She said: “In my research last year I found over 1,700 pop and indie female artists and musicians signed to UK labels.  I am currently compiling them into a list and will publish them so that the female talent is out there.”

“I believe it is a lack of imagination that means bookers aren’t booking female talent.  Men have always dominated so it’s easier to let them just dominate. Bookers have their established relationships and trusted acts and that is what they are sticking with, playing it safe.”

The debate surrounding the Tramlines 2020 lack of gender diversity has been fortified by The 1975 ‘s Matt Healy’s recent announcement that his band will no longer play at festivals with too few female acts.

Abbie Ozard, a songwriter and vocalist performing at this year’s Tramlines festival, has praised The 1975’s pledge, saying it is making active steps towards change in diversity.

She said: “90% of the music I listen to is mostly female and that’s not even on purpose it has just happened.

“So, it’s confusing. I don’t think the festival organisers do it purposefully I just think they’re missing out on amazing music.”

Above shows the proportion of male and female acts announced so far for this year’s Tramlines.

However, some are dismissing Tramlines’ lack of female artists, saying the festival simply booked what is right for that particular event.

Jake Vertigo Stratford, local Sheffield  DJ of Cotswold Road, says he recognises talent in female acts/artists but suggests the bigger acts for festivals tend to be underwritten due to agent fees etc, saying this goes for DJs too.

He said: “Personally I don’t think it’s a case of promoters purposely booking male acts, I think it’s more a case of the more well known artists that are male come in at the cheaper price.”

“I also think it’s just a case of booking what you know will work for the right price.” 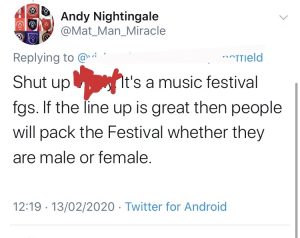 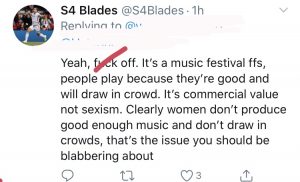 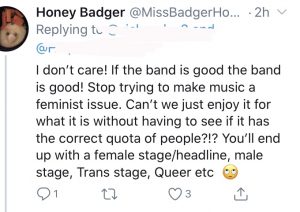 In response to the criticism, a spokesperson for the festival has said: “Tramlines is committed to improving the gender balance at our event and we have already announced high profile female artists.

“Our line-up is not complete and we continue to look for bookings that will ensure more women are featured.

“The lack of equal representation in the music industry is a global problem and we are currently looking at a new Sheffield based educational project, enabling women to participate in all areas of the music industry.”

For more information on diversity in the music industry, check out Vick Bain’s website: http://www.vbain.co.uk/ .