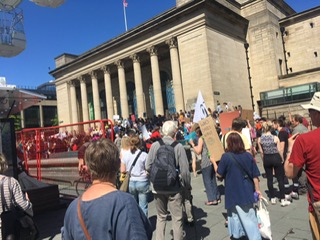 This Friday marks the anniversary of the first Sheffield students’ climate march to join schools across the country.

On Friday 15th February 2019 students walked out of classrooms in 60 cities in the UK during the first nationwide coordinated walkout. Tomorrow the students will march again in the third protest this academic year.

Student, Extinction Rebellion activist and protest organiser, Nathan Strathdee, said: “In the year since the first youth strike, the conversation around the climate crisis has changed. Councils around the country have declared climate and ecological emergency and it has become the issue of our time. The campaign has been remarkably successful in raising awareness.

“Unfortunately, little action has been taken to tackle the climate crisis. This inaction is illustrated in the Australian wildfires, Indonesian floods and ever more extreme weather.

“Looking forward, our leaders must focus on deeds not words, taking climate action and including youth voices in the decisions dictating their future.”

Students have called on the government to declare a climate emergency, address the severity of the ecological crisis and change the curriculum to make the environmental crisis an educational priority.

Since the strikes first began last year Sheffield City Council have pledged to become carbon neutral by 2030 and on May 1st 2019 the Government declared a climate emergency.

“This is why the strike on Friday is important as we need to keep reiterating to the government and Sheffield City Council that more needs to be done, the climate crisis is not going away.”