Sheffield United U23 vs Wigan Athletic U23: Match Preview 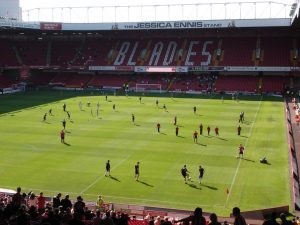 Sheffield United U23s take on Wigan Athletic U23s in a tough fixture for the Blades this afternoon. United are looking to overcome their recent poor form, where they are without a win in their last six matches.

They shared the spoils with Barnsley last time out after a 1-1 draw, where manager Andy Hughes was forced to field a young team after losing players on loan during the transfer window.

The Blades were a goal down going into the second half, but put in a convincing performance that resulted in a well deserved equaliser in the 88th minute, earning them their first point in three games.

Opponents Wigan are unbeaten in 2020, having won an impressive six of their last seven games, which leaves them fifth in the table and 13 points ahead of tenth placed Sheffield United.

Spectators will be hoping for a similar game to last between the two sides, where United’s Jake Young sealed a point in the dying minutes of extra time to cap off an exciting 2-2 draw.

The young Blades team will be looking to leapfrog bitter rivals Sheffield Wednesday, who currently sit one point ahead of them in ninth place, although the Owls have played two games less.

The game, which kicks off at 14:00, will be played at Christopher Park in Wigan.