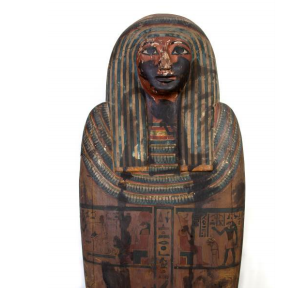 A free Ancient Egyptian exhibition opened at Weston Park Museum on 15 February, featuring over 300 artefacts on display for the first time.

The artefacts include two ornate coffins and a bronze statue of Egypt’s first ever pyramid. The oldest piece dates back to 80,000 BC.

“We’re absolutely thrilled to be able to showcase so many more of the objects and stories people wanted to see in the new gallery.”

The highlight of the exhibition is a coffin containing the mummy of Nesitanbetasheru, a woman whose title is inscribed ‘lady of the house’.

The exhibition also concerns other significant historical events. It features a book of textile fragments donated by Joseph Kenworthy in 1929, in memory of his son Jesse, who died in the First World War.

Previously, only a small selection of Sheffield’s Egyptian artefacts were on display. But a £187k grant from the Galleries Improvement Fund has given the public access to the collection.

The collection was amassed between 1875 and 1939, but new access to it aims to provide children and young people with a new wealth of new information about ancient society.

Laura Travis, Head of Learning and Participation at Museums Sheffield, said: “Ancient Egypt is one of our most popular school workshops and a real favourite with our younger visitors.”

Ancient Egypt is the first of two new galleries opening in Weston Park Museum this year. The exhibitions aim to bring new visitors to the exhibition, and to celebrate Sheffield.

The displays will look at how these objects came to be in the city and the approach to collecting material from other countries and cultures at the time.

The exhibition is permanent.