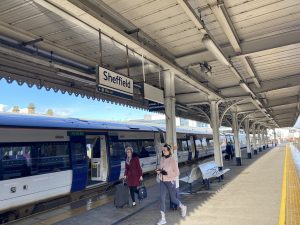 Two train stations in Sheffield are both in the bottom of the worst 20 performing stations in the UK.

According to the data collected by York-based staff, at Sheffield station, more than half of all trains are not departing on time, with 57.3 percent of all services running late which is the 12th worst figure in the country.

Even worse, 62.5 percent of trains will be late at Meadowhall station, making it the fifth-worst place to catch a train among UK stations.

However, some citizens think they have never had a problem with Sheffield station and catch the train often. They feel upset that the station have been labelled as the worst.

John Rouse, 69, a retired man living in Sheffield, said: “The train’s delay is really the fault of the train operating companies. The station can’t do much about it. I think Sheffield is one of the better stations on the network. At least it has free toilets and they’re clean and well serviced. Signage is good, and it’s easy to find the right platform.”

Maria Levesley , 51, a nurse manager in Sheffield said: “It’s not all negative. We found the staff really helpful on Monday. After storm Dennis, although there were many delays due to flooding, we got advice from the platform staff and train guard, and my daughter was able to get a different train to make her connection at Birmingham.”

A spokesperson for the Rail Delivery Group, an organisation which represents train operators and Network Rail, said: “We know how frustrating delays can be which is why we’re doing more to tackle them from spending billions on major upgrades to ease congestion, to running public campaigns to reduce trespassing.

“So that passengers know the level of service they can expect, the rail industry has adopted the most rigorous to-the-minute measure of punctuality in Europe and has launched an online tool so people can check the past reliability of their specific train, not just their station.”

Nicky Bea, 50-year-old living in Sheffield and working in Manchester for 20 years thinks Sheffield station is lovely but still needs improvement for the services on the train.

“Millions of pounds has been spent improving our lovely station, but I have paid thousands of pounds for a season ticket and had to stand up and couldn’t sit in empty first class frequently. A few weeks ago there was live coverage of Sheffield station during peak morning commuting time, outside the main entrance. It was really telling there weren’t many people at all in the background and indicated to me that people had given up using trains, using alternative methods like car moving instead. Nothing changes for us.”