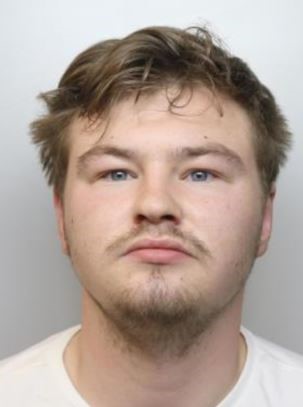 A 21-year-old man has been jailed after sexually assaulted two teenage girls.

Bradley Simpkins, 21, of Arthbourne Road, attacked a 13-year-old girl in an alley near Gleadless Road as she was walking home from school last April.

Detective Constable Claire Franklin, the investigating officer, said: “The teenager had been on the phone to a family member when she was attacked. This meant her horrified relative heard her screaming for help as she listened helplessly at the other end of the line.

“Incredibly, in the struggle, the girl managed to activate a security alarm on her phone, which startled Simpkins, causing him to run off.”

A few days earlier, Simpkins attacked an 18-year-old girl as she walked to her work in Gleadless.

DC Franklin said: “The victim was pulled to the ground as she was on her way to catch a bus near to Gleadless Common Fields. He grabbed her from behind and ripped part of her clothing off. As she tried to fight him off, something distracted him and he left the scene.

“This has had a profound impact on the victim, who was simply going about her daily life.”

Simpkins was identified through CCTV, and pleaded guilty to two counts of sexual assault at Sheffield Crown Court on 19 February.

Seven days later, he was sentenced to five years’ imprisonment and placed on the sex offenders’ register. He will also be subject to a Sexual Harm Prevention Order for 10 years.

DC Franklin concluded: “I know anyone reading this will feel a shiver run down their spine. To target young women in this way is horrifying to all of us and he has quite rightly received a significant sentence.

“I cannot speak highly enough of the victims and witnesses in this case, who have unfalteringly supported our investigation and been prepared to attend court to see Simpkins brought to justice.

“They have all demonstrated great bravery. I must pay particular tribute to his 13-year-old victim, who was courageous enough to face cross-examination in court.