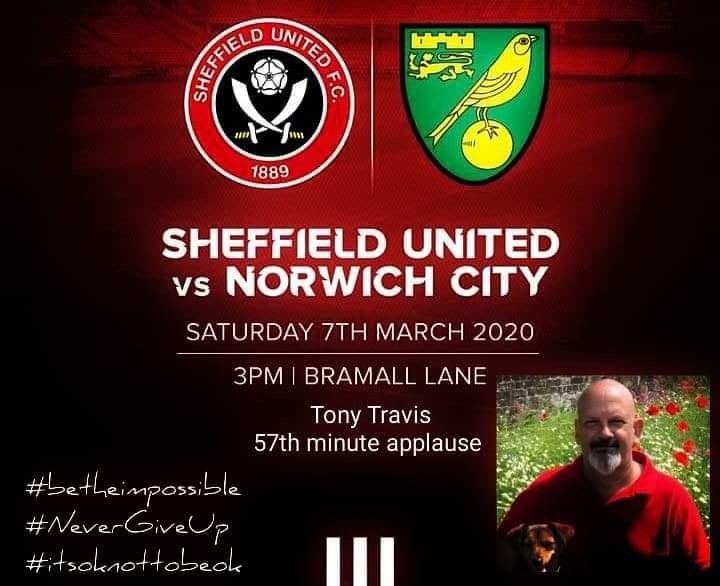 The heartbroken family of a lifetime Sheffield United fan who died after a battle with mental health are hoping fellow Blades join them in paying tribute.

Tony Travis, 57, a lifelong Blades fan from Dinnington, collapsed and despite efforts from members of the public, could not be saved.

The family have approached the club to spread awareness for a minute’s applause, in the 57th minute, at their game against Norwich City at Bramall Lane on Saturday 7 March.

Becky Clayton, his niece, said: “He had been going since he was three-years-old. He was a season ticket holder and often took his two kids with him.”

“It would be unbelievable if it happened. My mum and Tony’s wife, Jo, have battled for years to try and help Tony, so it would mean the world.

The club, who cannot officially advertise now they are under Premier League rules, have been incredibly helpful to Tony’s family, she said.

Becky, who has received two free tickets to the Norwich match on Saturday, is looking forward to the game where eight family members are going, including Jo.

The club will display a picture of Tony at half-time on the electronic screen, to pay tribute. Becky and her family want this to serve as a reminder that mental health matters.

“There’s no funding for mental health. Tony and his wife were both working full-time and couldn’t afford private health care” she said.

Tony, who attended the charity Andy’s Man Club regularly, was suffering from mental illness for more than three years.

Tony will be remembered by his partner of 17 years, Jo; son Craig, daughter Kaylie, granddaughter Eveleyn and his three sisters Jane, Diane and Lyn.