An 18-year-old man appeared at a Sheffield court today for attacking his girlfriend and damaging several cars.

Reece Sinclair admitted he grabbed his ex-girlfriend, Leigh Oxley, by the throat and punched her in the ribs after a heated argument in December last year.

Sheffield Magistrates’ Court also heard how he caused £6,500 worth of damage to four cars after repeatedly losing his temper in a spate of incidents.

One of the cars Sinclair, of Gaunt Road, Gleadless, Sheffield, damaged belonged to his social worker, Tracy Ward, who had picked him up to take him shopping for his 18th birthday.

Prosecuting, Robert Coyne, told the court, after an argument developed Sinclair spat in Ms Ward’s face before smashing her car door against another parked vehicle.

In her victim impact statement, Ms Ward revealed she is still anxious about going back to work after the incident last August.

Sinclair pleaded guilty to two counts of criminal damage to property, two charges of harassment and one of assault.

Sentencing Sinclair to 40 hours’ of unpaid community work, District Judge, Naomi Redhouse, said she didn’t believe a custodial sentence would be beneficial and hoped he would ‘grow up’ over the next two to three years.

Sinclair, who became tearful as he was sentenced, was also told, as part of his community order, he must not contact Ms Ward for 12 months. 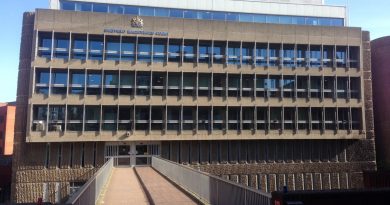