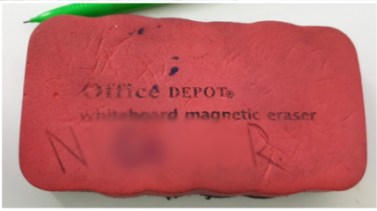 An investigation has been launched by Sheffield Hallam University after a lecturer found a racist insult scrawled on a whiteboard eraser.

Dr Peter Olusoga reported the incident to his managers after he found the rubber in a room that he teaches in.

After publicly sharing the offensive comment, the psychology lecturer, has received support from shocked students.

Dr Olusoga, 41, said: “I wasn’t particularly angry or upset about it because I didn’t think for a second that it was aimed at me personally.

“I was more bemused as to why someone would write that on a whiteboard rubber.”

“But then it dawns on you that it is an attack on every person of colour on campus, so that’s when I became pretty angry about it.”

Dr Olusoga has taken to twitter to share the shocking discovery and is determined not to let the issue go. 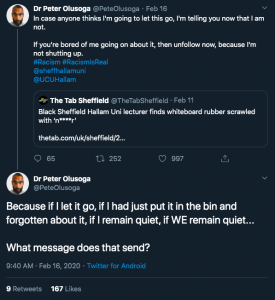 Many students have responded by sharing their disgust on the matter.

Dr Olusoga wants staff and students to be made aware of this incident, and to be reminded of the procedures and importance of reporting this kind of issue.

He said: “I’m pretty comfortable in my own skin and with how to handle this sort of thing.

“I want the university to make sure that every 18-year-old student, away from home, away from family, would be equally comfortable reporting any racism, bigotry or harassment directed their way.”

The University has made an official statement explaining the incident is being fully investigated but identifying the author of the racist insult will be difficult as the room is used by several cohorts.

Dr Sally Jackson, Chief People Officer, at Sheffield Hallam University, said “Racism in our University will not be tolerated in any form and the safety of our students and staff on campus is of paramount importance.”

Dr Olusoga said this is the first time he has ever experienced racism in Hallam, but is aware there have been racist incidents in recent years at both Sheffield Universities.

He said: “Both universities have a real opportunity to take the lead in Sheffield in taking an anti-racist stance. No matter what we think we’re doing, there’s always more work to be done.”