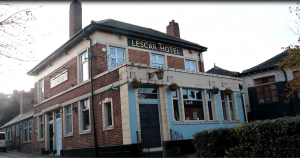 Stand-up is tough enough as it is, even when business is booming. But in a pandemic, it has been nothing short of a disaster. Toby Foster, 51 and Scott Bennett, 41, reveal to me how 2020 has affected themselves, their industry and their work since March.

The past 9 months have taken their toll on comedian and promoter of The Last Laugh Comedy Club, Toby Foster. Often filling his empty weekends, like the rest of us, with booze and Saturday night telly. However, comedian and writer Scott Bennett has done weekly live streams in the first part of lockdown and has hosted and participated in both and in-person gigs. The Last Laugh Comedy club have been in business for 30 years around Sheffield and South Yorkshire. The Last Laugh have performed in The Lescar for 26 years and regularly perform on Friday and Saturday nights in Sheffield Memorial Hall. Toby has been involved for the last 20-25 years, with his current role being the promoter of the club and its events. The pandemic along with all of the complicated and confusing rules has meant all of this has been cancelled, with only one outdoor event that he has been involved with since March.

“We haven’t traded since March…we should take £40,000 in December, this is a fucking disaster” sighs Toby Foster. His days are usually filled with planning weekly live events for the 500-seater Memorial Hall and then weekends performing in front of his sell-out audiences. Speaking to me over a zoom call he tells me these days stand-up is very different: “December is out biggest month every Friday and Saturday night sold out from the Summer, and were not doing anything, its just horrific.” Furthermore, in April his one member of staff for the Last Laugh had to be made redundant to keep the business afloat, “it was heart-breaking having to let go our one member of staff.” December is always the biggest month in comedy and most other entertainment professions. The huge hit that stand-up has taken this year cannot be understated, with lots of comics being in similar positons to Toby having barely worked since March. Toby went on to tell about the tough graft that stand-up is, often spending weekends on public transport, trekking up and down the country and performing for the masses. Stand-up is an anti-social job and Toby told me that it is soul-destroying being at home on Friday and Saturday nights. The Last Laugh have only been able to put on one event this year, “It was so labour intensive, hugely expensive and incredibly tough for the acts, who struggled to get in the groove on the night, some of them died on stage and forgot their lines… it was weird,” explains Toby. The club was given a £10,000 grant from local government to help the club cope with the impact of the pandemic, Toby described this as “a drop in the ocean.” This has all left the business at its bare bones and Toby waiting patiently for Sheffield Memorial Hall to be at capacity for a Last Laugh night.

“When March came I had my first weekend off in 20 years, and I didn’t know what to do with myself.” Comedian Toby Foster is married and lives in a house in the Sheffield area, and the only replacement for the adrenaline has been alcohol and Saturday night telly, “my weekends have been filled with booze and depression.” Toby got into comedy because of the buzz and adrenaline only live-performing can give someone. Stand-ups go into the business to entertain and perform for the masses. Toby told me he would often travel from Scotland all the way down to the south coast to perform in Brighton all in the same weekend. “Not only have we lost our money, we have lost the kick, the excitement and the endorphins from performing.” It’s not just the business that has been lost—it’s a way of life. Another unique part of being a stand-up that both Toby and Scott told me of the unique community and bond they have, “although we only see each other a few times a year we’re a tight knit community, even the ones I don’t like I miss!” “The emotional support I’ve had from the stand-up community has been huge, as we’ve all lost a lot this year.”

Stand-ups are remarkably tough and are able to move on from tough patches in their careers and lives. “not only have we lost our money, we have lost the kick and excitement of performing.” There are endless stories of comics stepping into new jobs to provide for themselves and their families, Scott told me that he had done freelance work with his for his previous job in product design and has carried on with his TV and radio writing, “I’ve been in a fortunate position that I’ve had these jobs to fall back on.” In March, Scott and his wife were both staring at unemployment in the face, “it was the most frightened I had been in a long time.” Many comics have taken up working for delivery companies like Hermes and Yodel. Scott went on to say, “You’ve got to do what you’ve got to do and there’s no shame in that and you’ve got to pay the bills.” On the other hand, Toby’s main concern about this is that many stand-ups may not come back: “I doubt that there will be huge appeal for stand-ups to come back post-pandemic, as it will have given many the opportunity to move out of London and potentially work in a job which has more sociable hours.”

The arts industry contributes £111bn a year to the UK economy and since March the arts has largely been ignored. You might remember some now laughable campaigns that the government has run to insult the arts industry, such as the belter that was the adapt and retrain one from July. Scott told me, “The government seems to think that the people working in the arts are doing it as a hobby… and when my work is taken away or ignored it is very difficult to deal with.” With all of this going on the generosity of spirit from the stand-up community has been invaluable, Scott told me that he has performed for the Covid Arms, a monthly online night of stand-up hosted by Kiri Pritchard-Mclean, the money raised is split between the performers and The Trussell Trust, a UK-wide foodbank. Scott told me, “People have been very generous and recognised that comedy can do a lot in dark times.”

“The number of cases traced to hospitality has been very low.” This is possibly the most frustrating fact for stand-ups right now. Particularly this is most difficult for promoters like Toby Foster and the venues, who have put in all of the precautions at expense and still cannot put on events. Scott performed at the first live and socially-distanced gig since March and commented, “I have seen how safe the events are and it’s very puzzling as to why government still won’t allow for the gigs to go ahead.” The uncertainty has caused mass anxiety amongst stand-ups who are very cautious that if coronavirus rates don’t fall, comics could lose another year of business. Everything is done 6 months in advance and too often stand-ups feel they are taking 2 steps forward and then 1 step back. The sheer range of both online and in-person material and events has shown how versatile comedians can be, even in the toughest of times.

“Hopefully on the other side there will be a huge boom in comedy as people will be itching to go out again.” Stand-up comedy is unique job; you are constantly working and looking for new work and this year has led to lots of people rethinking. However, Scott commented that, “Those that love stand-up won’t have question their work and their drive will still be there.” But, comedy not only requires quality content its requires us, the punters, the audience, and according to Toby, “People coming out post-lockdown and attending gigs, then comedy will recover.”