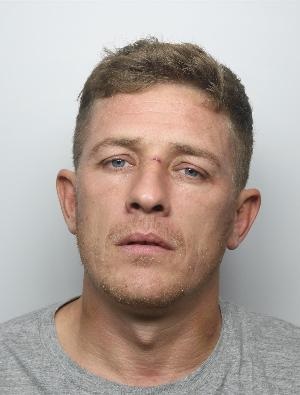 A 34-YEAR-OLD MAN has been put behind bars after assaulting a man at a caravan site, on Moss Road in Doncaster.

Kiel Tetley, of Bowness Drive, Doncaster, pleaded guilty to Section 18 assault and threatening to cause damage at a previous hearing. He appeared at Sheffield Crown Court on Monday, where he was sentenced to six years in prison.

The incident occurred on the 19th September 2020, after witness described having heard Tetley threaten to burn down the site earlier in the day, which was then reported to the police. Later in the day, police received reports that Tetley had subsequently attacked a man with a machete. The victim had reportedly stood outside the defendant’s caravan as Tetley ran up to him and grabbed him before swinging the machete and striking blows to his body.

Witnesses claimed to have heard him say “I’m going to hack your head off”. Upon arriving on the scene, police discovered a 36-year-old with multiple lacerations to his head, neck and back, who was immediately taken to hospital for treatment.

The injured male later stated that he feared for his life and has been left scared for himself and his family. PC Leanne Daffern, who led the investigation said “Tetley is now behind bars for a serious assault against another man and for making threats that caused a lot of fear and distress. I hope the community is reassured by the quick and positive action taken to put him behind bars.”