Sheffield Brewery Relaunches ‘I Love You, Will U Marry Me’ Beer

THORNBRIDGE BREWERY have relaunched their “I Love You, Will U Marry Me” beer following the removal of a piece of graffiti that has been a part of Sheffield’s skyline for almost 20 years.

In 2001, Jason Lowe decided to propose to his then-girlfriend, Clare Middleton, and wanted to make a public show of it on a footbridge at Park Hill. However, things didn’t work out and they broke up 3 months after. Sadly, Ms Middleton has passed away from Cancer since.

Rebekah Wadham, Marketing Manager of Thornbridge Brewery, said: “We initially launched the beer in 2015 but only brewed it for a short period.

“Sheffield is our spiritual home as we have a number of pubs around the City and we decided to bring it back to raise some money for a fantastically relevant and local cause, which under the circumstances of the sad story surrounding the proposal, is very poignant.”

The company hope to make approximately 30,000 bottles subject to feedback from their customers. They have also decided to donate all profits made by the Strawberry Blonde Ale to Sheffield Mind. 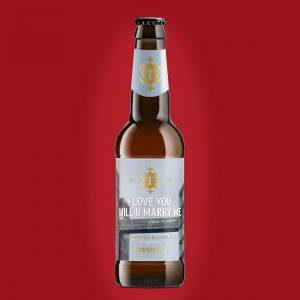 Ms Wadham added: “We are doing this for philanthropic reasons, to support the incredible work Sheffield Mind do, particularly at a time which is so difficult for so many.

“The graffiti is synonymous with Sheffield and we feel Sheffield Mind should benefit from the product, to support those in need of help.”

According to Thornbridge, the feedback so far has been overwhelmingly positive.

Those who loved the beer back in 2015 are excited for its return. Other people who do not know Thornbridge or were unaware they brewed the beer a number of years ago, have commended them for donating all profits to such a great charity.

According to Urban Splash, a developer which illuminated the graffiti, it has been removed to allow essential repair work to take place.

However, Urban Splash have said the message will be replaced in the exact same place.