Team news, stats and odds ahead of Leicester City vs Sheffield United at the King Power Stadium on Sunday (kick-off 2pm).

Despite their impressive win against Aston Villa earlier this month, Sheffield United couldn’t build on their momentum and suffered another defeat in their last game, at home to Southampton. The chances of survival are still very slim for Chris Wilder’s men this season, yet a win against the team who currently sits 3rd in the table could just be what The Blades need to make a real fight to stay up. A win away at Leicester and a loss for West Brom away at Crystal Palace could see Sheffield United just one point off 19th.
Leicester City will hope their growing list of injuries to starting players won’t take its toll on the team performance, while Sheffield United with their own injury problems, will hope the return of Phil Jagielka sparks more confidence in the team. 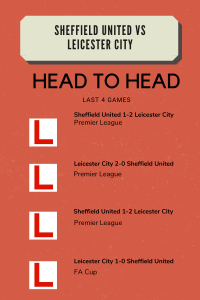 The previous meetings between the two sides.

Former Sheffield United striker Carl Asaba on a podcast with popular fan channel, ‘The Sheff United Way’, talking about the problems at the club and the future.