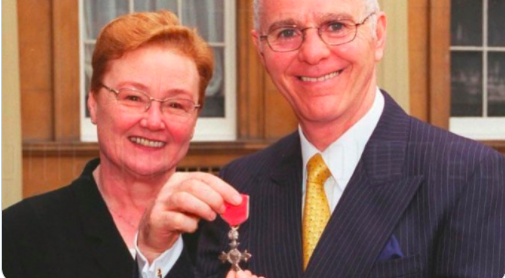 The wife of boxing trainer and manager Brendan Ingle, Alma was heavily involved in the sport. In the 1970s and 80s, she was one of the few women in the country to have a career as a judge and promoter.

In 1975 she was one of the first female amateur boxing judges in the country, six years later she became the second woman to obtain a professional boxing promoter’s license.

Her notable achievements in the boxing world led to Alma becoming the first woman to be elected to the British Boxing Board of Control divisional committee.

Speaking to the Sheffield Star, Alma’s daughter Dr Bridget Ingle paid tribute to her mother, saying: “In an era where women lost their jobs when they had children, she carved a place for herself in the boxing world alongside our father Brendan.”

“We will celebrate her life by holding her values close and by treating everyone we meet as we would expect to be treated ourselves”.

Four decades ago, Alma and her husband founded the Ingle Gym in Wincobank. It became a ‘haven for disruptive youths’, where troubled young people in the area could practice boxing. It was also regularly used by some recognisable names in the sport, such as Prince Naseem Hamed and Kell Brook.

An outpour of social media tributes have been made after Alma’s death was announced on Tuesday. Many such as fellow boxing promoter Frank Warren and football reporter Alan Biggs have acknowledged her impressive achievements as a woman in the industry

The Ingle’s legacy has been continued by their two sons, Dominic and John, who now run the gym together. 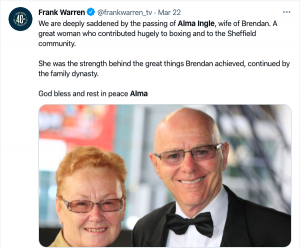 A touching tribute to Alma from boxing promoter Frank Warren

After initially being treated in Sheffield Teaching hospitals, Alma was eventually moved to St Luke’s hospice where she passed away on Sunday. She leaves behind five children and fourteen grandchildren.