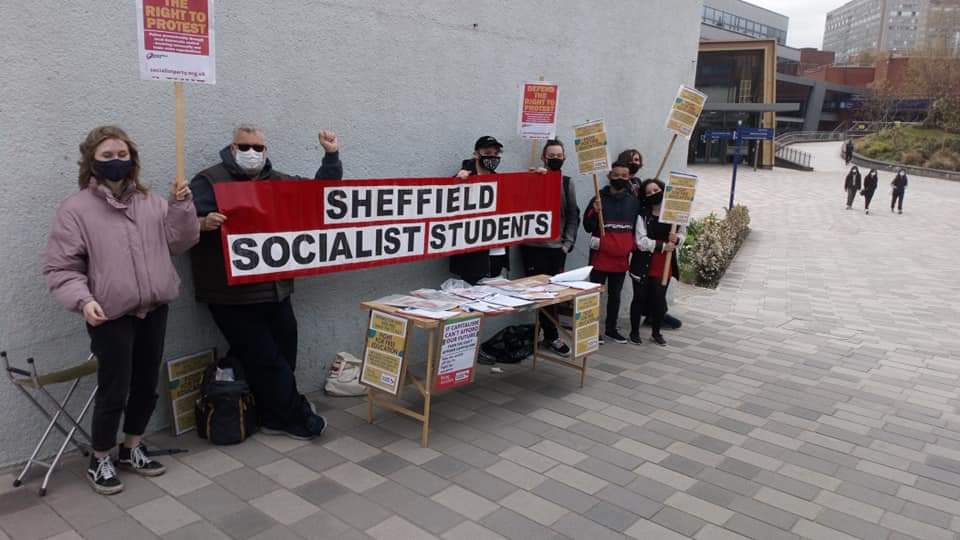 Students protested at the University of Sheffield and Sheffield Hallam campuses yesterday, demanding a tuition fee refund for this year’s teaching.

It was part of a ‘national day of action’ with protests at 26 campuses across the country, organised by Socialist Students.

The demonstrations were after Prime Minister Boris Johnson announced universities would not be able to resume in-person teaching until at least the 17 May.

Adam Calvert, 21, was one of the organisers and said: “We’re being charged the same rent, the same tuition this year as we would be in every other year, but the value just isn’t there.

“We’re trying to push for a rebate, some form of acknowledgement that we are paying this huge amount of money and getting into loads of debt, and then we’re not getting it in return.”

There has also been rent strikes in Sheffield with students withholding their second semester’s rent, as they have not been allowed to attend classes in-person for most of the year.

The 17 May date for students to return to in-person classes has been met with derision by many.

Yesterday’s protests also aimed to shed light on the struggles of students throughout the pandemic, which many feel have been overlooked by the government and the media.

Mr Calvert, a student from Matilda Street, said: “The Covid bulletins that Boris has been doing, they mention schools every time, the plan for pubs, but he doesn’t mention universities.

“The one thing we’ve had is lectures can start on May 17th which is useless, we need them to acknowledge that we exist.

“It stems from the government, but the universities could do a much better job at acknowledging that we’ve been struggling and supporting us on it.”

no mention of university students, at all???? it’s ok Boris I’ll write my 20k word dissertation with no books, no resources and being moved from remote to on-campus learning every other month. im tired

However, the government has provided its reasoning for continuing to keep university classes online.

When asked in parliament why universities are still online compared to other areas of life, such as schools, pubs and retail, Universities Minister Michelle Donelan said: “The area of concern has and always will be the movement of students and formation of new households, which doesn’t occur in schools or further-education colleges.

“Many of the things opening up at stage two focus on being outside, and social mixing remains focussed on being outside. The key thing is they don’t involve the formation of a new household.”