Operation Sceptre is an anti-knife crime campaign carried out by UK police forces, focused upon taking knives off the streets and reducing the devastating impact caused by weaponised attacks. South Yorkshire Police have taken an active role in the operation by highlighting the risks that carrying a bladed weapon can bring, as well as targeting offenders who use and carry knives in the area.

Sergeant Jon Simpson, from Sheffield Police Force said: “By combining stop searches, knife arches and the nose of a drugs dog, we’re in a great position to identify and deal with those who may be in possession of drugs or weapons. 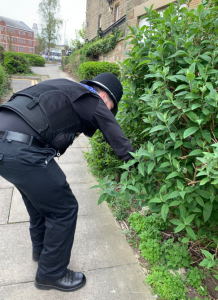 Sweeps will be carried out up and down the country to take weapons off the streets.

As the neighbourhood team for the city centre, we know that people do have concerns about knife crime and whilst incidents are rare, proactive policing methods such as stop searches and being visible are really important.”

The national week of awareness began on April 26 and will conclude May 2, as police presence is increased up and down the country and forces proactively focus on targeting knife crime. As part of the campaign, officers have been carrying out stop searches, weapon sweeps and deployed knife arches in several locations throughout South Yorkshire

Knife surrender bins will be located around police stations in Sheffield.

SYP have also positioned knife surrender bins across the county, where knives and weapons can be disposed of anonymously. Knife surrender bins can be found at the following stations: Snig Hill (Sheffield), Churchfield (Barnsley), Main Street (Rotherham) and College Road (Doncaster), police encourage locals to hand over dangerous weapons in the battle against violent attacks.