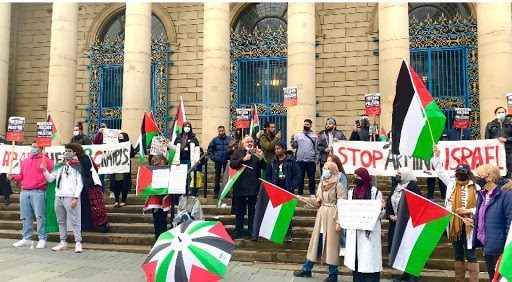 On Tuesday, hundreds of people came together in solidarity to protest against the latest series of violent events towards Palestinians.

Activists gave speeches on Israel’s violation of human rights and international law, the continuous aggression and systemic abuse inflicted on Palestinians in Jerusalem and Gaza.

Their words were met with claps and cheers of support from the crowd. 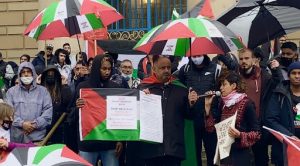 One of the speakers, Shahd Abusalama said: “No words can express my anger and in these times, I find consolation in the power of our voices and chants to support our siblings and to keep on going. It is a regime, colonialism, and apartheid that stretches from the river to the sea. We are going to carry on the struggle with them.”

A minute of silence was observed, and a list of names of the Palestinians killed in the attacks was read out. 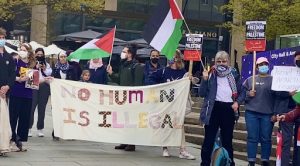 Protesters hold a banner reading: “No Human Is Illegal”

Another activist, Musheir El-Farra, said: “It is important to know why we are here for the Sheikh Jarrah families. Let’s chant for them to know we are with them and the whole world is not abandoning them. It is about us as human beings to stand for justice. If it wasn’t in Palestine it would be somewhere else and I can assure you- all of you will be there.”

Protesters held their fists in the air and chanted: “No justice no peace”, and “From the river to the sea, Palestine will be free.” 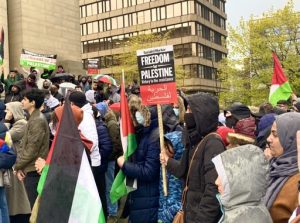 Protesters stand in solidarity outside of Sheffield City Hall

Amna Khan, a 22-year-old student and one of the protest’s organisers, said: “It is important now more than ever to stand with our Palestinian brothers and sisters and make our voices heard. We cannot let history repeat itself, we must speak out for the Palestine people when they are being silenced. Let us make it clear- Palestine will never die for as long as we continue to fight for it.”

The weather took a turn for the worse but as the rain poured, the morale didn’t drop. 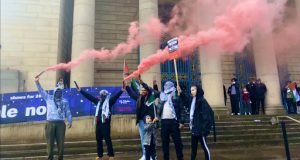 Abdullah Okud, organiser of Black Lives Matter Sheffield, added: “Being active on social media is the very least we can do for our Palestine siblings to raise awareness of what is going on.

“Organising a protest is not enough. There are other things you can do such as signing petitions, speaking to your MPs, and getting them on board. Let’s not just make this about a protest. It is our responsibility to get involved.” 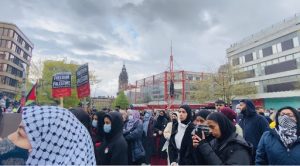 There was a large turnout to the protest