Sheffield Greenpeace have taken action against Tesco’s involvement in deforestation 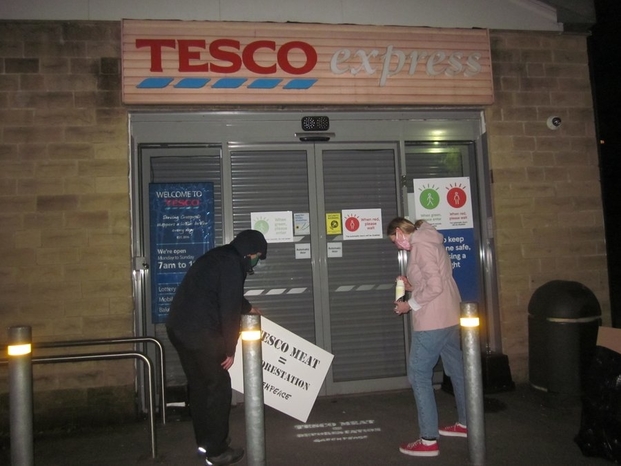 Sheffield Greenpeace volunteers have been taking action to urge Tesco to stop fuelling the destruction of forests in the Amazon.

Greenpeace have found that Tesco is the largest offender and seller of meat in the UK compared to other supermarkets.

The group have been targeting several Tesco stores in Sheffield and across the UK in the hopes of sending a message to the supermarket’s CEO Ken Murphy.

Volunteers have highlighted Tesco’s links to deforestation by using a stencil reading ‘Tesco meat= deforestation’ in front of stores and spraying it with eco-friendly wash away paint.

Greenpeace volunteers in #Sheffield and across the UK are taking action to urge @Tesco’s CEO Ken Murphy to stop fuelling the destruction of forests in the Amazon and other regions of Brazil. Take action here: https://t.co/NlPwNSFBmm @tescofood #deforestation #industrialmeat pic.twitter.com/i0crwTgnIn

Richard Teasdale, 52, is the group coordinator of Sheffield Greenpeace.

He said: “We want Tesco to reduce the amount of meat they sell as the amount we are eating worldwide isn’t sustainable due to links to climate change.

“Tesco needs to sever their links to JBS, the largest industrial meat company in the world who are involved in the deforestation of the Amazon to graze cattle and to grow soya.

“The Amazon is vitally important, not just for its indigenous people, not just for the wildlife but also for carbon capture because a huge forest like the Amazon absorbs vast amounts of carbon dioxide to keep climate change at bay.”

Greenpeace have also previously targeted Sainsbury’s in connection with plastics as they were found as the largest offender of the issue.

Mr Teasdale added: “What we hope to achieve is two-fold. We aim to raise public awareness of the issue as a lot of people don’t know exactly what is happening with deforestation. We also want Tesco to reduce the amount of meat that they sell over the coming years and persuade them to cut ties with JBS and its subsidiaries.”

Dawn Spier, a Greenpeace volunteer said: “It’s important because there’s only so much you can do yourself and eventually what you have to do is reach outside your circle and influence other people. This is about raising awareness and educating people to connect the dots as to what’s happening.

“People don’t look at the picture behind supermarkets and the devastation that’s caused with going to them and buying their meat products. This has a far-reaching effect in the supply chain and a lot of people don’t make the connections with what’s happening in the Amazon.”