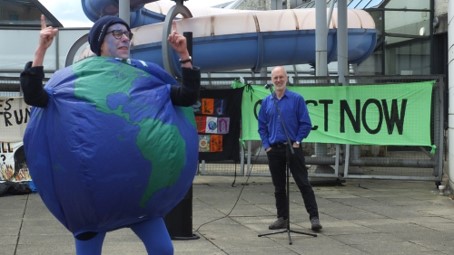 Green campaigners yesterday protested for Sheffield Council to act now on the climate and nature emergencies.

Extinction Rebellion, Friends of the Earth, Green New Deal South Yorkshire and Sheffield Greenpeace joined forces at Ponds Forge as councillors arrived for their first meeting since the elections.

After the floods in November 2019, Sheffield City Region Mayor Dan Jarvis declared a climate emergency. A report from Arup outlined the steps that could be taken to combat this across housing, heating, industry and transport.

Ruth Powell, from Extinction Rebellion, said: “Our council declared Sheffield’s climate emergency in 2019 but we have seen precious little change. Two years have been lost to inaction.

“This is intolerable – the new council must act on climate and ecological issues without delay.”