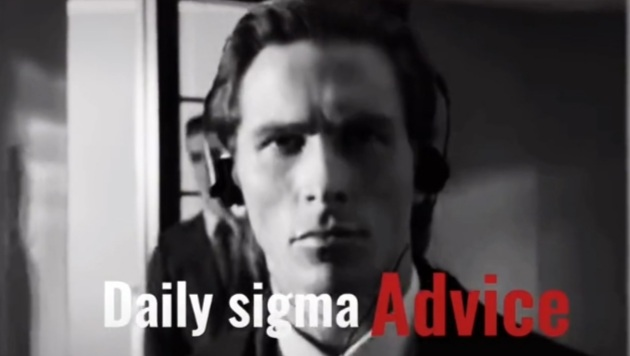 Young men are aspiring to be just like their favourite fictional characters, from the Joker to Patrick Bateman or Dylan Durden. This all comes about from the new term ‘sigma’ and the male desire to be greater than most – despite developing bigoted and terrifying traits.

WARNING: This material contains explicit content that may trigger or upset readers. Viewer’s discretion is advised.

Patrick Bateman and Joker – when one mentions these characters you immediately think of their traits, right? An egomaniac, a psychopath or a freak of nature. You may find the characters interesting or even dress up as them for Halloween, but I bet you’ve never said; “I wanna be just like them!”

What if I told you that people have done exactly that? More recently, a 24-year-old Japanese man dressed as the Joker attacked 17 passengers with a knife on a Tokyo train line on October 31st, 2021.

This isn’t an uncommon trend – with acts of terrorism involving Gotham’s infamous clown starting around 2012, with the Aurora, Colorado, shooting. Seventy were injured and twelve were killed.

It’s become terrifying that there’s now a community that idolises characters like this in pursuit of obtaining the ‘sigma mindset’ and it’s only growing in popularity – especially in young men across the world.

The term comes from incel ideology – detailing that social status is determined in a similar fashion to that of a wolf pack. In this case, the ‘alpha’ would remain at the top yet the ‘sigma’ achieves a similar status whilst remaining introverted.

An ‘incel’ is a member of an online subculture which defines themselves as unable to gain romantic or sexual partners despite desiring one. Obtaining the status of ‘sigma’ then allows them to.

“I master my own fate – I don’t need to be an alpha to attract women or even be successful in my work. I’m the whole package and Bateman is the perfect inspiration.” says John*, 21, student and Patrick Bateman idoliser.

“Every guy wants to be an alpha – I mean come on! Who doesn’t want to stand outside this shitty hierarchy and embrace what these characters have?”

John had watched American Pyscho (2000 Horror/Mystery directed by Mary Harron) in early June 2017. Since then, he had taken up several routines seen within the movie. This includes Patrick Bateman’s strict washing routine, hairstyling and even workout plan. 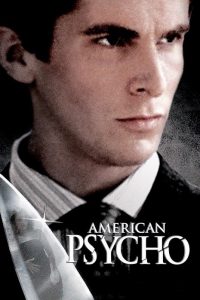 “I’ve never felt so fucking alive. Women want me and I’ve seen ridiculous improvements in both my health and assignments”. Less than 10 minutes later, John would go on to add to the ‘Sigma’ label.

“It’s the alpha but better – I’m at the top without having to be boisterous or needy. I get what I want and when I want.” John concluded before showing me some posts that keep him motivated.

One post includes a clip from American Pyscho – featuring Bateman having sex with two women and flexing his muscles, pinned below are the words “Reject normality and embrace difference. They’ll follow like cattle.”.

Another features a clip of Joaquin Phoenix’s Joker laughing before cutting to a video of a young man (visibly seeming around his 20s) bench pressing and then flexing – a comment reads “All you need is a little push.”.

McDermott concluded in her investigations and time with young offenders that their crimes had been committed with desire to gain social influence.

A factor that these aspiring ‘sigmas’ crave and therefore look for inspiration in these fictional characters.

“I worked with one young person who was obsessed with the notorious prisoner, Charles Bronson. I think it’s really important for young people to have positive role models.” McDermott detailed.

“The media in general has a role to play in influencing criminal behaviour at a young age. These characters are no exceptions.”

On Tiktok, the term #sigma has garnered 349.8 million views with hundreds and thousands of likes and comments. The top-rated video reached 4.3 million views displaying a man hitting a woman back in retaliation. A surprising note was that the comment section was disabled. 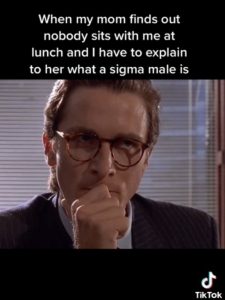 A screenshot taken from one of the countless Tiktoks featuring Patrick Bateman and ‘sigma’ terminology. For context – Bateman pulls such a face and pose as he begins contemplating whether he should murder the man opposite him.

Of the top 50 #sigma videos; 22 of them included clips from American Pyscho, six from the Joker and three from Wolf of Wallstreet.

Another trend featured these characters either degrading women or objectifying them. In other instances, videos featured similar content however blamed women for making them this way. This accusation was incredibly prominent in content relating to the aftereffect of a breakup.

Dr Maria Tomlinson, an academic who specialises in topics such as toxic masculinity, menstrual stigma and transgender identity also fears this trend.

“I feel they’re packaging up in an unhealthy way. It’s important for men to take time after a serious relationship. I feel these men are feeling all pumped by this change but not really processing what’s happening.” Tomlinson said.

Tomlinson believes toxic masculinity is a huge problem within modern society. That men are bottling up emotions and engaging in identities that are both toxic and unhealthy. That perhaps the young men involved with the ‘sigma’ mindset are facing a similar issue.

“This kind of self-absorbed mentality is really worrying in how it’s going to translate into how women are treated.”

For example, one video on Tiktok depicted a montage of Joker clips which were conjoined with the phrases “I will fight for you but not for you.” or “You made me realise that women are just another obstacle for society to throw at me”.

Young men are identifying with the ‘sigma’ mindset to improve themselves both mentally and physically, yet sexism is rooted at its core. This mindset is especially prominent within gym and self-improvement videos. 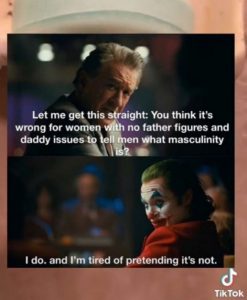 Another screenshot taken from sigma related content – this one featuring the infamous “You get what you fucking deserve!” clip from Todd Philip’s 2020 Joker.

“It comes from a place of insecurity and they’ve adopted this mindset to disassociate from their previous identity. Perhaps trying to block out their emotions.”

“This seems like a mindset where they’ve completely lost empathy with other people. They’re at risk of harming people a lot more as they don’t really care about their actions.”

#motivation has 84.4 billion views with #success following behind with 525.9 million views. Embedded in these hashtags are videos promoting this mindset and once pursued – taking you back to these fictional characters.

John would later add; “Women make us who we are. They treat us like shit and expect us to stay silent and take it.”

John has admitted that he would not act upon his impulses yet glorified rape, assault and objectification towards women.

“They’re fucking pigs ripe for slaughter. I don’t care – no man should.”

Alongside sexist content – varying accounts have used the fictional characters as a symbol for racist or violent crimes. For example, infamous media influencer Paul Nicholas Miller, 33, or known online as GypsyCrusader was jailed for illegal possession of firearms. 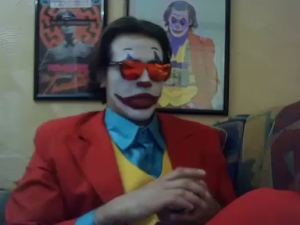 Influencer Paul Nicholas Miller, or commonly known as ‘GypsyCrusader’ to his online audiences’ dresses as the Joker and takes to his online platform to target and bully minorities.

Miller would hold online streams dressed as the Joker – in videos he would encourage his viewers to follow his political campaign to advocate for another civil war. Alongside racist rants – he would take to the popular live service ‘Omegal’ in which strangers would be placed in a chatroom together with their cameras on.

In one instance, Miller teased a young black boy after asking whether his eyes and teeth would be visible if he were to turn off the bedroom lights.

Miller would continue to reference various points of the Joker movie as well as brandishing the costume whilst on stream – providing a sense of chaos that even the fictional character would be afraid of.

Comments and viewers would publish fan montages of his ‘funniest clips’ or ‘greatest moments’ using similar jargon or hashtags that implied his activity was ‘Sigma’ like and something to idolise.

Tuan Tran, 20, a student movie critic and blogger who organises online forums and chats has dedicated his life to his hobby of watching movies. Additionally, he has studied some of these fictional characters to better articulate his opinion.

“It’s ironic really, I mean, the fact that people idolise these characters shows they never understood the point of the movie.” Tran stated.

Tran noted that some characters are intended to be idolised in mainstream Hollywood – for example, some of the highest grossing movies come from Disney.

As of now, social media platforms have attempted to silence content relating back to the ‘sigma’ mindset – through disabling comment sections, removing videos or banning accounts.

The question is, what will come of the men who have jumped too far down this rabbit hole and for those ready to sink deeper?

*John – Anonymity has been granted to said interviewee. For their own protection, they will go by the alias John.