Junior darts has recently taken the darting world by storm. The reason for which is currently unknown. Connor Bragger explores the role the Junior Darts Corporation (JDC) has played. Speaking to darting experts, JDC ambassadors, and a former women’s world number 1, we explore how the JDC is sculpting the next generation of darting legends.

The darting world is so individualistic that building a community would seem impossible. However, professional dart player Steve Brown had a vision and executed it: creating academies across the United Kingdom with unique ideas and concepts. A training system that had never been done before, alongside coloured grading to give junior players goals to work towards. Steve created a seamless transition between the junior and professional game, with seven of the top 128 players on the pro tour coming through the comparatively small JDC system. The JDC has managed to produce talents like Bradley Brooks and Keane Barry who will be participating in the PDC World Championships 2022. This is before expanding across the globe in the quest for world domination. The JDC has altered the way junior darts is perceived and this is how they did it.

Since its inception in 2015, the JDC has changed and adapted its methods to become a better learning platform for darts. The JDC teaches juniors aged 8-18 that darts is for anyone. It’s inclusive for people of all abilities whether darts is ingrained in your life or a brand-new hobby. Over time, the JDC’s reputation has increased with sponsorships secured with Winmau, the Professional Darts Corporation (PDC) and more. With the PDC as official partners, the PDC now recognises all JDC tournaments. This has opened the door to junior players qualifying for PDC tournaments and tours by participating in such events.

A stand-out feature of the JDC is its infamous coloured grading system. The coloured medal system is similar to karate-style grading, with each colour corresponding to your level as a dart player. The colours begin at white for beginners rising to black for the high-level players. Originally, the coloured system was represented by coloured shirts but this has since changed to medals. JDC administrator Darren Barson said that darts has become so popular that everyone wants their own darts shirt and some academies now have their own. The new medal system was a more financially stable method of grading due to juniors growing out of their shirts. This system is used to help juniors track their progress and have something physical to show off that progress. “A child can wear them, they can go to school and show off what they’ve done,” says Darren.

To further execute their vision, the JDC created the Greenzone dartboard. This board is the same as a normal dartboard except the middle of the board has a larger green section which is called the Greenzone. This made matches more competitive between the higher and lower-skilled players. The higher skilled players finish a match by hitting a double, whereas the lower-skilled players finish a match by hitting the Greenzone on the JDC dartboard. Darren told us it was to break down two barriers – spending three hours on double one trying to finish a game and spending ages working out which doubles to go for. The larger Greenzone finishing area allows beginners to just practice throwing rather than worrying about their maths. “Greenzone is giving the majority of young kids the chance to enjoy the game,” said Darren. 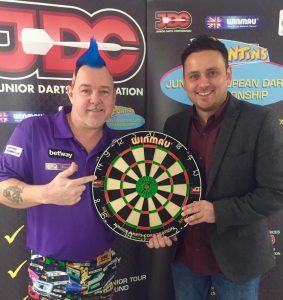 The JDC uses a handicap system corresponding to the coloured grading medals. The colour of someone’s medal is decided through their performances in a training programme, specifically created for the JDC, which is used as a medium to measure the ability of players. It consists of 57 individual targets utilising the entire dartboard. “It’s challenging in some areas when you go for the doubles but it’s not so challenging when you’ve just got to hit the single numbers,” said Darren. The system used in the JDC is explained below.

To achieve the score required for a coloured medal, you must average that score over eight weeks. Darren said this is to ensure that it’s not a fluke, as you are consistently measured on it. The aim is for players to focus on themselves rather than reacting to their opponents, as you would do in matchplay darts. Darren said: “It has a proven track record, and no child really goes backwards. You’re never going to get to a green level and then go back to purple, you’re going to keep progressing.” This allows the JDC and players to keep track of progress easier as well as know the next steps to improve.

Dr Linda Duffy – sports psychologist and former women’s world number one – believes that the JDC method works more psychologically. When you are in a match environment, there’s pressure to hit certain scores. The former women’s world number one explained it like this: “If you’re under pressure to hit a double 20 and you practice double 20 a thousand times in your practice room. Psychologically, you’re going to be more equipped to hit that double 20.” As the JDC system makes you practice a range of targets, making players more confident they will hit them when required.

Over the past few years, the JDC has made strides in the women’s side of the game, with Sky Sports pundit and commentator Laura Turner becoming a JDC ambassador. Laura said, “it’s nice to have a female voice in there and one of the things that the JDC really are working on is trying to get more young girls involved, especially after the exploits of Fallon Sherrock a couple of years ago.”

Juniors at the JDC receive amazing opportunities with the final of the JDC World Championships being played at the Alexander Palace in the middle of the PDC World Championships. “That’s just an amazing experience and a huge opportunity to play in those crowds,” said Laura. The prize money is also high, set at £2,000. “When my husband Aaron won something as a teenager, he used to win TVs and electrical goods,” Laura joked. “The process of actually winning money and being able to support yourself is just a much more professional outlook on it.” 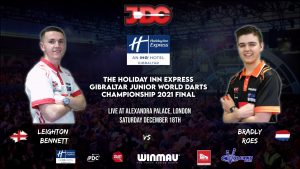 Not only do the players get the opportunity to play at the Alexandra Palace, but will also be treated as professionals. They’ll arrive and practice at the same time as well as be directed by the tournament director, Graham Fairhurst, throughout the day like the senior players. Darren said, “we are absolutely mimicking the PDC because we believe that if you’re going to go for something, then go for it properly and be a professional.”

Over the last few years, the JDC has made a push to spread further across the globe with academies in the USA, Australia, Germany and more. Instructor of the Italian Darts group, Francesco Daros, believes that the JDC is the top for the players who want to approach this sport. He thinks it’s a fundamental step to be able to understand the heights you can reach as a player. Francesco has been trying to give darts a future in Italy where it is not recognised as a sport: “I have always thought that the future of Italian darts depends on kids, who have to grow up with a different mentality to the older generation.”

The future of the JDC seems bright, with many goals on the horizon. A coaching course will be delivered next year so when the junior players are coached, it is done professionally. Phoenix darts and the JDC are also working together to help bring soft tip darts to the UK as it’s safer, more colourful and has bigger targets, which the JDC are hoping will bring more kids to the sport. This is going alongside the aim to bring darts to more schools as it is great for mental arithmetic.

The rise of junior darts has been incredible for any darts fan to see and this is just the beginning. The unique and obscure methods of the JDC would be seen as a detriment by many, but instead is the standout attribute of the organisation. “The JDC is pioneering the fact that the junior players aren’t just second fiddle to the adult game, says Darren. “we’ve made people realise that the kids are pretty good.”