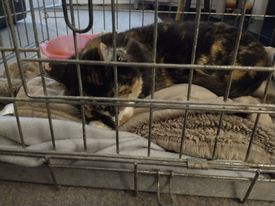 Over £10,000 has been raised to fund an operation for the cat that was found on the pitch at Hillsborough, after it went missing for eight months.

In June 2021, Alison Jubb’s cat Topsey escaped her carrier on the way to a cattery in Worrall and went missing for eight months. On 8 February, Topsey was found running onto the pitch at Hillsborough in the match between Sheffield Wednesday and Wigan Athletic. 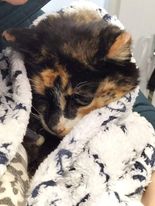 Topsey is now reunited with her owner, Alison Jubb

The vets believed an animal had bitten her and shaken her meaning she could not walk properly. Mrs Jubb was told Topsey has a fractured vertebrae and so, on 15 February, set up a Just Giving Page to raise £9,000 to fund the operation. Late on 16 February, the target was reached.

Mrs Jubb said: “It’s brilliant and I still can’t believe it. I was jumping up and down last night when we hit the target. It’s so good for Topsey who can now get the treatment she needs.

“I can’t believe people are so generous and so good about this cause. I wanted to give her every chance of being alright.”

Topsey has been in specialist care since Monday and is in a cage to stop her from walking. Mrs Jubb was able to see her on 13 February and took her home on Sunday to stay the night for the first time in eight months. 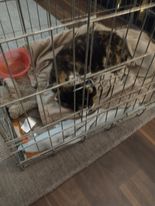 Topsey is now nine years old and has been a part of the Jubb household since she was a kitten. Mrs Jubb’s daughter in law saw that a cat had run onto the pitch at Hillsborough and said that it looked like Topsey. Later, she received a call from the vets to say that they had her cat.

Mrs Jubb said: “I can’t say a day didn’t go by when I wasn’t thinking ‘I wonder if she’s alright? I wonder what she’s doing? Is she still alive?’ I never thought I would see her again.”

The Just Giving Page is currently on £10,285 and any extra money will be donated to Pet Samaritans.