Sheffield United look to enter play-offs in clash against Swansea

Sheffield United continue their play-off push on Saturday as they host Swansea City at Bramall Lane.

Last time out the Blades were held in a 0-0 draw with Yorkshire rivals and strugglers Hull City. United dominated the majority of the ball with 72% possession and had 21 shots, but only registered three on target.

Paul Heckingbottom, speaking to the official Sheffield United YouTube channel after the game, said: “We can’t beat ourselves up over that. We know why we haven’t won, we haven’t taken one of our many, many chances.

“On another day if teams come here and sit behind the ball like that and make it difficult for us, if we play like that we’ll win the games.”

Paul Heckingbottom has got his side in a fine run of form, since he took over from Slavisa Jokanovic in late November, as the Blades have only lost one of their last 13 league games.

David McGoldrick, Jack O’Connell and Rhian Brewster still remain side-lined for the Blades. A win for the Reds, and results going their way, could see Sheffield United in the top six come Saturday evening. 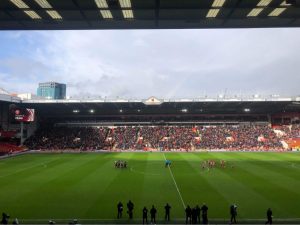 A packed Bramall Lane will be hoping for three points at the weekend.

After a positive start to the season, Swansea City have dropped to 16th place in the Championship table. The Welsh side have only won two of their last six league games, but they collected three points in midweek against Bristol City.

The Swans fell behind thanks to a first half opener from Andreas Weimann but goals from Michael Obefemi, Cyrus Christie and Joel Piroe secured a 3-1 comeback.

The teams’ away form makes for bleak reading, with only three wins in the Championship on the road this season.

Russell Martin, speaking to the media in his pre-match press conference, said: “What an exciting challenge Saturday is. It is an opportunity to show how good we can be. It is a real chance to grow together and see what we are capable of.”

He also confirmed that defender Kyle Naughton will not be available for the trip to South Yorkshire.

Sheffield united haven’t beaten Swansea in any of their last four meetings. The Blades’ last win against the Swans came in the form of a 1-0 home victory in December 2010.

Both sets of fans will be hoping that this match will be better than the reverse fixture back in August, where a 0-0 draw played out at the Liberty Stadium.