A Sheffield man is looking to raise £25,000 after his dad tragically died while ascending Ben Nevis.

Simon Kliment plans to climb the mountain in memory of his late dad, Martin, who was pronounced dead after falling from around 300 feet in harsh weather conditions.

Speaking in his post on GoFundMe Simon said: “My dad passed away doing something he loved, you can’t ask for much more than that.”

Martin’s two friends, who were with him on the hike, contacted the search and rescue team on Sunday at around 3pm. His body was found at around 1pm the next day and was pronounced dead that afternoon. 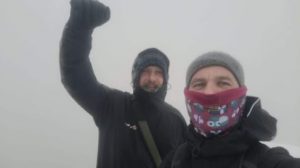 A photo of Martin [left] taken moments before the accident.

The money raised will be put towards costs for the trip as well as donating to the Lochaber Mountain Rescue Team, who Simon has praised for their ‘tremendous efforts’ and ‘hard work’.

He also plans to donate half of the money to a cancer research charity, with Martin having lost his mother to the disease when he was just 20.

Ben Nevis stands at 4,406 feet tall, making it the largest mountain in the British Isles.

A group of around 20 family and friends plan to climb the Fort William based mountain at some point in July, depending on weather.

Simon said: “One of my dads traditions was to take a bottle of alcohol with him and have a celebratory toast at the top.

“We’ll be having a toast of Legacy Ardmore Whiskey, which is what my dad had with him at the time of his death, to honour him.”

The fundraiser has already received 65 donations, totalling to over £1,000 just three days since it started.