A Sheffield-based farm has slammed the band of rookie thieves that stole ‘the world’s slowest farm van’ last week.

Our Cow Molly in Dungworth doubles up as a successful and popular ice cream parlour. It has been supplying milk to Sheffield’s doorsteps for over two generations and is a real staple in the city’s identity.

The vehicle was snatched from the farm at around 3.15am on Wednesday February 16. Two unknown offenders snuck into the back of the property on Cliffe Hill and have been captured in video footage, clad in hoodies that concealed their faces.

Announcing the theft, a spokesperson for the family run business said: “Our farm utility vehicle was stolen at 3.15am this morning. It is very noisy and slow and was driven from our farm in Dungworth along the B6075 into Stannington.”

They went on to express their confusion regarding why the thieves would target such a specific function vehicle, that is completely useless to anyone outside the farming industry.

Our Cow Molly owners said: “The people who have stolen this must be pretty dumb. It’s impossible to sell as the farmer’s union has been alerted, so no one would buy it as they know it’s been stolen. It can’t be stripped for parts and is also very recognisable making it difficult to hide.

“This car is incredibly slow, at its full speed you can easily run past it.”

But the theft, despite its absurdity, is not without burden. Our Cow Molly relied on the vehicle to move food, troughs and other heavy things.

South Yorkshire Police have issued an appeal to the public for help. They said: “Police in Sheffield are asking for your help to locate a vehicle owned by Our Cow Molly dairy farm, after it was reported stolen last week.

“The distinctive vehicle (pictured) is green and is described as looking like a golf buggy. Have you seen this vehicle? If you live or work locally, did you see anything suspicious?” 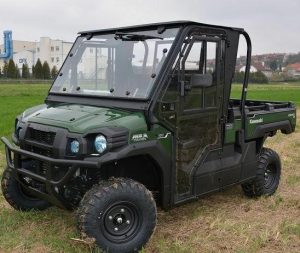 If you have any information that could help, please call 101 quoting crime reference number 14/36713/22. You can also give information to Crimestoppers anonymously by calling 0800 555 111.