Ukrainian women and Russian student talk about conflict between their countries

A Ukrainian woman and a Russian man who are living in Sheffield have expressed their concern on the ongoing conflict in eastern Europe.

On Thursday morning, Russia officially declared war on Ukraine by launching a missile attack on Kyiv. Sirens blared this morning in the capital followed by a series of explosions throughout the country.

Tanya Klymenko, a doctor of Molecular Biology originally from Ukraine, said: “I was absolutely shocked when I heard the news. Up until this morning, I thought Putin wouldn’t dare to openly try to invade Ukraine. I just could not believe he could do something so dangerous to our and his own country.”

The current conflict has been on a rise since December, when more than 100,000 Russian soldiers were seen on the border to Ukraine. The hostilities between the two countries have been simmering for years but escalated in 2014 following the Russian appropriation of Crimea from Ukraine.

Dr Klymenko added: “The UK is in a fairly unique position to influence figures in Russia since they have so many assets here. So, I hope they will use this unique position to help us. Especially since in the last eight years, even though there was a conflict that was going on, nobody really tried to support us.”

While Ukraine tries to deal with the recent attacks, world leaders are discussing what should be done to gain control over the situation. In his latest statement, PM Boris Johnson said that the UK will launch a ‘massive package’ of sanctions to ‘hobble’ Russia’s economy.

I am appalled by the horrific events in Ukraine and I have spoken to President Zelenskyy to discuss next steps.

President Putin has chosen a path of bloodshed and destruction by launching this unprovoked attack on Ukraine.

The UK and our allies will respond decisively.

Yaroslav Matveev, 20, a Russian student at the University of Sheffield, said: “It is a sad state of affairs when you wake up one morning and your country is at war with your neighbouring country that you always thought of as a friend.

“I’m feeling so shameful and guilty for my country; nobody in Russia wants a war. I don’t even know how I should talk to my Ukrainian friends or if they still want something to do with me. I wish that we could have peace instead of having war and that we could love instead of hurt each other.” 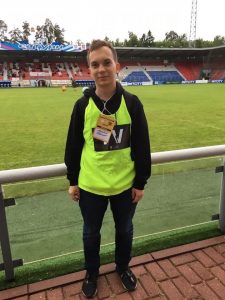 Yaroslav Matveev, a third-year Journalism student at the University of Sheffield