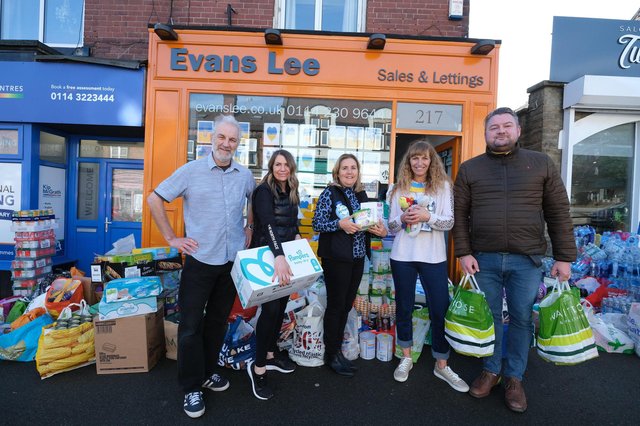 A Sheffield estate agent who has family in Ukraine is collecting essential supplies for refugees trying to cross the border into Poland.

Diane Evans, 52, explains the reality of living in Ukraine following Russia’s invasion in Kyiv. Her nephew, living in Lviv, has recently been conscripted into the Ukrainian army.

She said: “The army are not providing him with any helmets or bullet proof vests, that’s the reality of being conscripted. Men between 18-60 up to a point will be called up, which is worrying”.

“We have donated some odd items too that have given us a nice laugh – tumble dryer sheets, nipple cream and even a teddy with a garter. People have also been giving money, which I have used to buy supplies that we were missing.”

Ms Evans’ nieces amongst many other women in Lviv are making supplies for soldiers and civilians being conscripted. She said: “My nieces have been making camouflage netting. She says they sing whilst they make the nets.”

“It’s not just a news item, it has become very real and scary and something that shouldn’t be happening in 2022. This happened years ago when my Dad left Ukraine during the second world war, this feels like history repeating itself.” 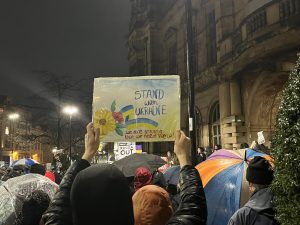 She expressed her gratitude for the solidarity the city is showing, admitting even the smallest donations are appreciated to help Ukraine.  She said: “One young boy came in with a pound coin – it makes me want to cry thinking about it – he said, ‘I’m sorry this is all I have’.”

She is also thrilled with the protests standing with Ukraine last night in Sheffield, she said: “I am checking the news constantly; I have to know that my family are safe along-side those in Ukraine trying to get out. This is very real.”