Ukrainians thank the people of Sheffield for their support 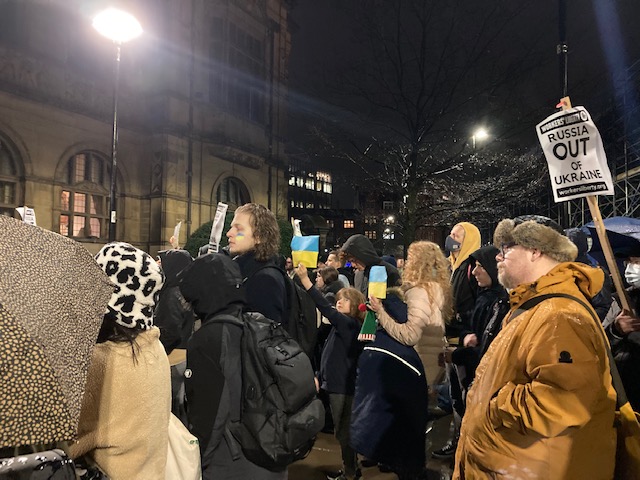 Ukrainians across South Yorkshire have expressed their gratitude for the people of Sheffield following their huge efforts of donations, demonstrations, and the council’s offers of sanctuary this week.

The Association of Ukrainians in Great Britain, set up by displaced Ukrainian people after the second world war, started a GoFundMe last month to buy inter-agency emergency health kits, which has raised over £1.5m so far.

Tanya Klymenko, one of the directors of AUGB and a lecturer at Sheffield Hallam, said at the rally outside Sheffield Town Hall on Monday: “I’m here to say a huge thank you to the ordinary people of Britain for your support. We have had almost 18,000 individual donations from British, amazing people. Thank you so much.” 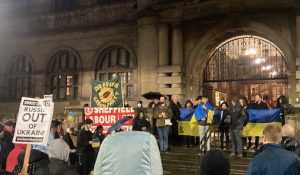 Organisers of the rally speak in support of those affected in Ukraine.

Sheffield Labour Party MPs were in Parliament at the time of the demonstration, so issued a statement to be read out on their behalf, discussing the people fleeing Ukraine into neighbouring countries.

They said: “We were appalled by the government’s unwillingness to offer them help. As the UK’s first city of sanctuary, we will welcome your refugees from the conflict. The government must remove barriers to them coming.”

Dr Klymenko and Ukrainians she knows here have experienced non-stop offers of help, including donations from parents of her son’s Ice Hockey team, and Sheffield based ‘Now Then’ magazine creating a database of donation point locations.

She said: “I have some dear family members in Kharkiv. My niece Maria is three. Yesterday she told me: “I can hear ‘boom’, it means ‘time to lie on the carpet’.

“I personally know of at least five lorries with clothes, shoes, blankets, and hygiene items that have already departed towards Ukraine from Yorkshire. This is unbelievable.”

Ed, 34, a member of Workers Liberty, organised the demonstration on Monday with their Ukrainian Solidarity Campaign.

He said: “It’s important that the people of Sheffield keep coming out and showing their support. It’s a really basic fundamental part of democracy, that small countries run their own affairs and not be bullied by big countries. Anyone who supports democracy should want Russia to get out of the war.”