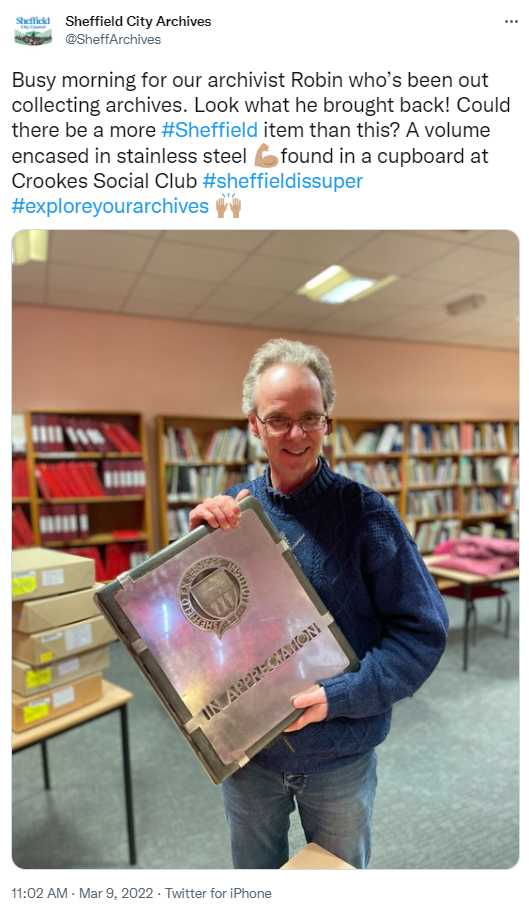 A mysterious Sheffield-steel-encased Volume, dating back to the 1940s, has been donated to Sheffield City Archives after being found in a cupboard in Crookes Social Club last summer.

“We took the time to go through our old cupboards, cabinets, and things like that. We have no idea how long it was there, because it was buried under accounts dating back to the 1950s – it’s probably been there since the mid-50s.

“I have no real concept of how the hell it ended up here.”

The book appears to be some kind of ledger, presented on July 1, 1947 by a ‘Sir Thomas Oxley Esq of Dore’ to the Sheffield Joint Council of Ex Services Associations, in appreciation of Sheffield men and women who served during 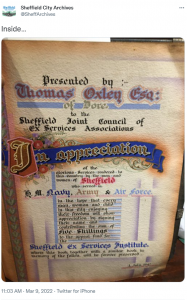 A page inside the artefact, dedicated to men and women of Sheffield who served in World War 2.

The artefact kept track of donations of at least five shillings towards a war recovery effort, travelling to various social clubs and venues during the time it was used. Countless donations are logged inside the book, but it’s difficult to determine who made them, as the book includes many signatures, yet no printed names.

Maurice decided to try and investigate the artefact, dusting off the book and searching through its pages for clues as to how it could have ended up in his filing cabinet. He found that donations had indeed been collected  at Crookes Social Club, but it was far from the last entry in the ledger, which was used extensively in the 1950s.

Eager to find answers, Maurice spoke to the current President of the Social Club, who has been in his position for at least 35 years. However, he had no idea the book existed either.

“It seemed too valuable an asset to have lying around in a cupboard or on display here, I automatically thought of the archives because I thought it was something that would go well with them.”

Research is now underway to try and answer some burning questions about the artefact. It’s currently unknown who ‘Sir Thomas Oxley Esq of Dore’ is, or where the ‘similar book’ may be, mentioned towards the bottom of the page.

Former Games Editor at Forge Press, and 2nd year BA Journalism Studies student at The University of Sheffield. Interested in all things gaming and general news!

Former Games Editor at Forge Press, and 2nd year BA Journalism Studies student at The University of Sheffield. Interested in all things gaming and general news!