A57 Snake Pass: Cyclists reflect on the weekend’s ‘trespass’ protest 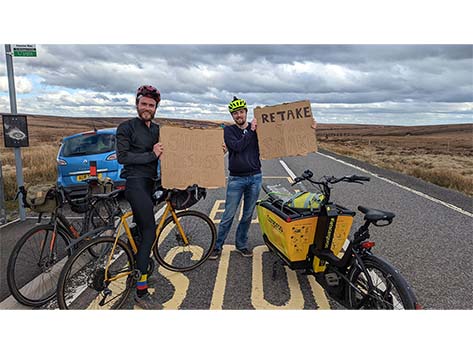 A ‘trespass’ took place on the Snake Pass this weekend as cyclists made peaceful protest against the closure of the 12-mile route.

The major road though the Peak District has been shut to all motor traffic (excluding residents) for the last four weeks after heavy rainfall caused landslips, with almost all areas closed to cyclists.

An estimated 60 people arrived to ride the 12 miles from Ladybower Reservoir to Glossop – a route normally thought of as too dangerous for cyclists. 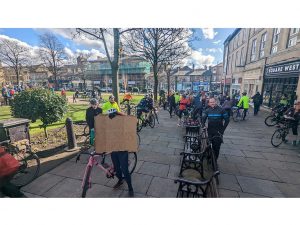 Protesters gathered to cycle together. Via Harry Gray.

Many cyclists have disputed Derbyshire County Council’s decision to close parts of the road, insisting the road is safe for multiple cyclists, despite the authority suggesting that the land was still moving.

Protest organiser Harry Gray said: “We did it because we felt the councils reason for the closure was unjust and they had no legal ground to close the road for access”

“It was great to experience the Peak District on our bikes without speeding cars.”

The action was made in reference to the Kinder Mass Trespass in 1932, when walkers trespassed across the Duke of Devonshire’s moors.

Prior to Saturday, the trespass received a mixed response, with professional cyclist Jake Stewart taking to twitter to ask those attending to consider how they would be portrayed.

Cyclists taking part faced no disruption from police, but flyers with warnings of safety concerns were distributed by the closure signs. 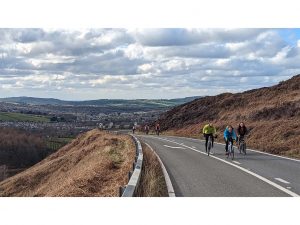 The Snake Pass was taken over by cyclists. Via Harry Gray.

Joe Crutwell, a data scientist from Manchester, 28, attended the trespass in support of the protest: “The highways workers and others in Glossop were very polite and courteous and all round it felt like a celebration of one of England’s most beautiful areas – for those who haven’t been able to experience it safely.”

The protest was also a social opportunity for many cyclists. Mr Crutwell said: “What you often lose on roads with lots of cars is the ability to talk and get to know those around you, as you’re having to constantly be on guard for your safety. I made a lot of new friends and I know many are planning on going back again on future weekends.”