Hallam FC are all but champions 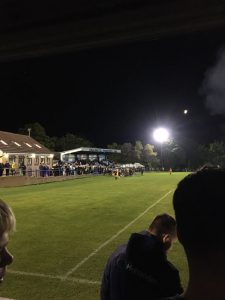 Hallam FC are one point away from becoming champions in the Northern Counties East League division one, which is tenth tier of English football.

A comfortable 4-0 against Worsborough Bridge put Hallam’s points tally up to 96 points. With North Ferriby in 2nd place on 90 points and only two games left to go it would require North Ferriby to score 39 goals if Hallam lose 1-0 in both games.

In the first 15 minutes Worsborough Bridge took control but gradually Hallam got organised and started to exert pressure. Vanks eventually scored whilst a late penalty converted by Royles settled things down further and it was looking good.

One or two more chances followed in the second half, but it was fairly quiet until Worsborough had a man sent off for dissent and a few minutes later Royles, scored a free-kick from 20 yards out.

Worsborough actually had their best period in terms of chances after that, but there was still time for Worsborough to go down to 9 men for an elbow. With Hallam two men up, just before full-time time Gregory worked well with Royles to get in down the right and score a fourth through an own goal from the opposition.

Hallam FC are already promoted to the Northern Premier League Division One East. and a simple draw would suffice in either of their last two games to be crowned Champions.