Sheffield City Council has announced that £700,000 will be used to tackle fly-tipping and graffiti across the city.

Plastic Free Sheffield Central has only recently been set up and is trying to pressure the council to make the city recycling-friendly.

Greg Hewitt, 33, the founder of Plastic Free Sheffield Central, said: “We are really happy with these new measures and pleased to see the council taking the matter seriously. It’s an issue that people really need to start taking care of. They need to realise they can’t do this and get away with it.

“Having cameras set up is really good. It is interesting to see how people will react to it. Will they start turning up in balaclavas to hide their identity?”

Since May 2021, the cameras have detected 200 incidents of illegal waste dumping, and the council has issued more than 80 penalty notices. 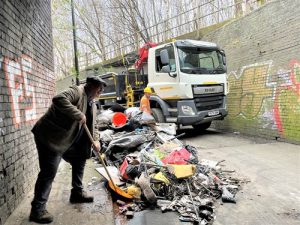 Cllr Fox said: “The money we’ve committed has allowed us to target some of the known problem areas in Sheffield. The intelligence we get from our new cameras, combined with the efforts of our hard-working teams, is making a significant difference.”

However, Plastic Free Sheffield Central still felt that more could be done.

Mr Hewitt said: “We would like to see more bins. I’ve spoken to a lot of people in my community who really want to see this and say that it has been a problem for a long time.

“The process it takes for the Council to put new bins in is too long and this is not acceptable. The longer the Council waits to implement these bins, the more chance the rubbish has to end up in Sheffield’s waterways.”