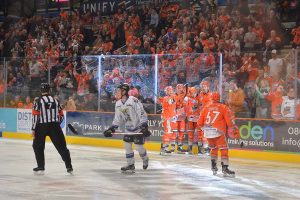 The Ice Hockey Elite League is now in the final third of the season and The Sheffield Steelers are second with a game in hand over the current leaders, the Belfast Giants.

After a 3-0 win away against the Manchester Storm on Sunday night and with playoff tickets going on sale this morning, it’s safe to say spirits are high at the club. But this doesn’t mean that the team are becoming complacent by any means, with a game against their biggest rivals, the Nottingham Panthers, looming on the horizon.

“The game should see 8,000 travelling fans from Sheffield so hopefully their support will get us through the game. We’ve got six games left and the two final games are against Belfast, our main rivals for the title, so it looks like it is going to go down to the wire.”

If Sunday night showed any sign of how the team will fare over the last six games, then there may not be much to worry about for the Steelers. A resounding 3-0 win against the Manchester Storm with a Man of the Match performance from goalie, Rok Stojanovic, who turned away all 36 shots he faced on the night.

All-in-all, Sunday night was a resounding victory for the Steelers. Now the focus switches to the game against the Nottingham Panthers on Saturday.