The city associated with steel and snooker is once again set to host the tournament at the iconic venue next week.

This year’s tournament will begin on  4 May 2022 until 8 May.  Players from America, Canada, and Egypt join the European field, including World Champions and World Senior Champions Stephen Hendry, Joe Johnson, and Jimmy White. 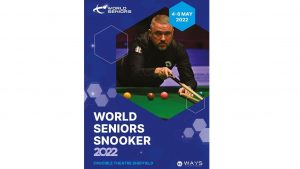 The World Senior Snooker Championship 2022 is set to be held at the Crucible Theatre.

The chief editor of SnookerHQ, an independent online news source of the sport, said fans will get the opportunity to watch some of the stars of yesteryear in action again.

David Caulfield added: “The glory days for these players on the professional circuit are long gone, but the competitive spirit remains as alive as ever.

“Loyal supporters still enjoy getting this opportunity to support some of their old favourites once more.”

A mix of 24 current, ex-professional and amateur players will meet in knockout rounds. They have qualified automatically through previous achievements in the sport or reached the venue stages via qualifying tournaments.

The World Snooker Championship has been held at the venue every year since 1977, and the Senior tournament has been held there since 2019. The defending champion is David Lilley.

Mr Caulfield continued: “Most snooker players have aspirations of playing in Sheffield at the Crucible.

“The World Seniors Snooker Tour has often carried the tagline ‘Dare to Dream’, because it offers amateur players over the age of 40 the opportunity to compete and potentially qualify to play in Sheffield.”

Jason Francis, Chairman of World Senior Snooker, said much of the history of the sport was created in the Crucible Theatre and the tournaments have a big commercial value to the city.

He continued: “It’s a global event that puts the focus on Sheffield for these 3 weeks. So many people globally associate the city with not only steel but snooker.

“I’m very excited knowing on the evening of May 8th someone will write their name into the sports history by becoming a world champion in the Crucible Theatre.”

Neil Smyth, Director of WAYS Facilities Management Ltd, the main sponsor of the event, described himself as a “huge snooker fan”.

He said: “I jumped at the opportunity to become involved with the Seniors World Championship given the fact it’s held at the home of snooker, the iconic Crucible Theatre in Sheffield.”