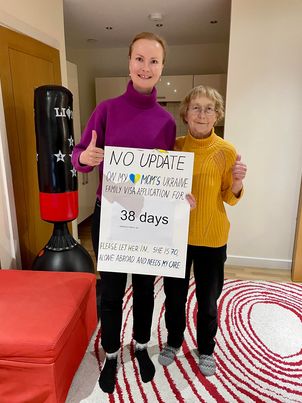 A Ukrainian woman living in Sheffield has been reunited with her mother after she launched a lone protest outside the city’s immigration centre.

Galina Ryzhenko’s mother Tanya, who is 70-years-old, had been living in Sweden after she fled Kyiv when the war with Russia began.

She arrived in Sheffield a few days ago and is now adjusting to life in the Steel City.

Galina said: “She’s doing great, she likes it here but she’s trying to adjust to the food, it’s just such a relief to finally have her here and not where she was.

“I still expected that something would go wrong when my mum crossed the border, but when I met her at Manchester Airport, that’s when I felt okay.”

Galina Ryzhenko applied for a visa for her mother when war first broke out in Ukraine. However, five weeks later she decided to take action after having no response. 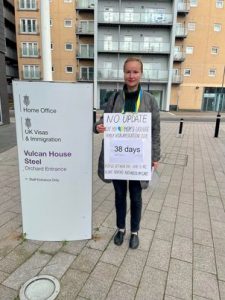 Galina Ryzhenko outside the Sheffield Home Office building on Millsands

“I was so sad and depressed that I would come back from work and couldn’t stop thinking about my mother, so I thought I’m not going to wait anymore, I will protest.

She stood outside the Home Office building called Vulcan House Steel on Millsands in Sheffield with a placard, detailing how many days it had been since she submitted the visa.

After 40 minutes, she was then approached by staff who offered her tea and their help in solving the issue.

It was found that Tanya’s visa had become stuck in the system and by the end of the day, it had been approved.

She said: “They were very kind, this isn’t that the people are evil. They are working in a very broken system, they said my application should have been rejected but due to the mistakes, they granted it.

“They were very sympathetic and did what they could, an hour later this permission to travel arrived and my mum is now here.”